The jury has returned a not guilty verdict in the case of state vs. Jacob in the matter of his impersonation of Esav to receive the blessings from Isaac. With appreciation to Mr. Mark Glazier, family lawyer, the 8th grade Chumash students presented their cases predicated upon their study of Bereshis 25-27. Opening and closing arguments were passionately presented by the prosecution and defense legal teams along with  direct and cross examination of witnesses including family members, an ophthalmologist to assess Issac's visual acuity at the time of the blessing confusion, a psychologist to judge Esav's mental state the day of the sale of the firstborn rite, expert legal testimony on the validity of oral agreement in contractual law as well as punctuation usage in law and even a goat to share her side of the conversation of conspiracy between Rebecca and Jacob. The Middle school peers and teachers in attendance comprised two jury pools (one was actually hung ) and had quite the education in all things legal and the privilege of being selected to a jury as a registered voter ! 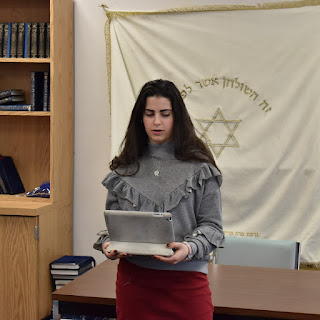 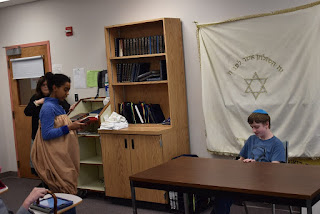 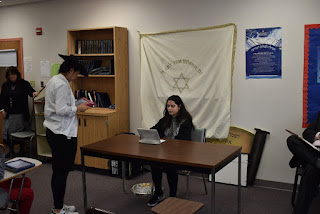 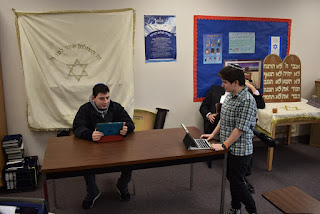 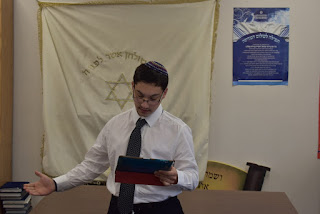 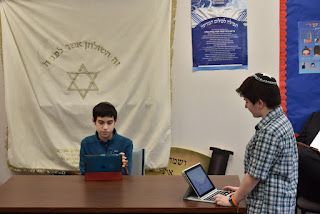 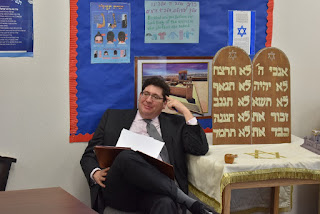 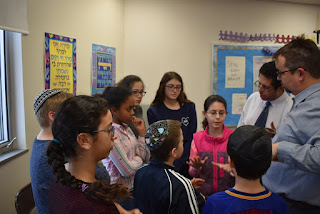 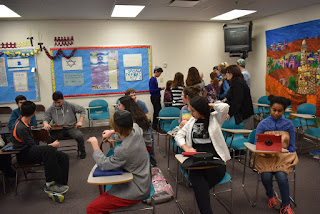 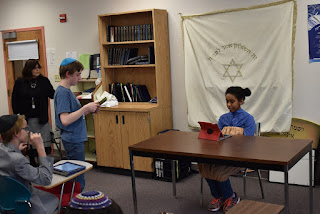 Posted by Miriam Gettinger at 1:46 PM No comments: 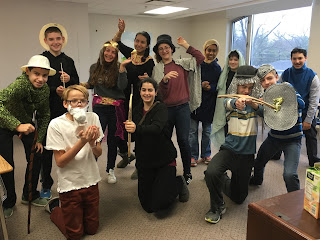 8th graders dressed in period costume as notable dignitaries attending Yitzchak's weaning party from kings and queens of the region to Shem/Aver, the Torah scholars of the time. Commentators suggest the festive occasion/"mishte gadol" was a brit/circumcision celebration, a bar mitzva, an educational initiative or a toddler birthday bash! Added fun in 5778 was that it occurred during Chanuka...menu of bagels and lox (for brit of course) as well as latkes and chocolate gelt! Note the numerous archer costumes as Yishamel took target practice at his younger brother Yitzchak , his rival for the bechora inheritance.
Posted by Miriam Gettinger at 8:20 AM No comments:

8th graders dressed in period costume as notable dignitaries attending Yitzchak's weaning party from kings and queens of the region to Shem/Aver, the Torah scholars of the time.  Commentators suggest the festive occasion was a brit/circumcision celebration, a bar mitzva, an educational initiative or a toddler birthday bash!

Posted by Miriam Gettinger at 8:07 AM No comments: 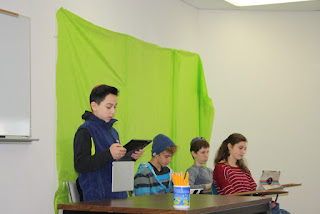 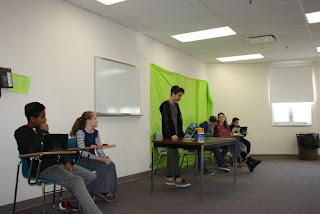 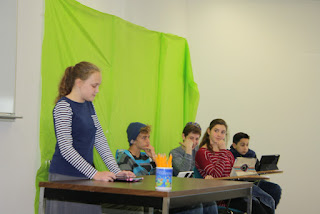 Students in 8th Chumash class are studying Bereshit/Genesis through the lens of sibling rivalry exploring the role of the bichora/ the rite of the first born. After studying the conflict between Kayin and Hevel, student pairs researched their family position status. Research about Alfred Adler's theory of birth order's effect on personality as well as Tanach and real life examples were cited to passionately prove each position's status and uniqueness.Seventh graders served as impartial judges! 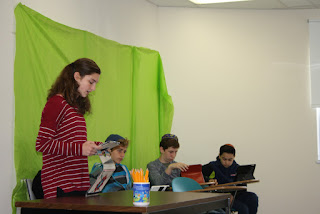 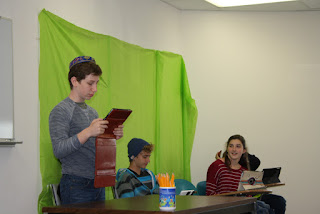 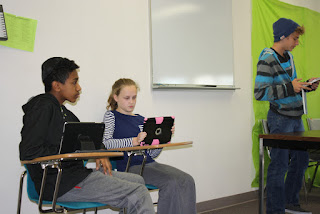 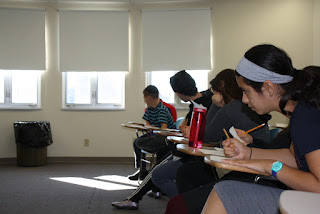 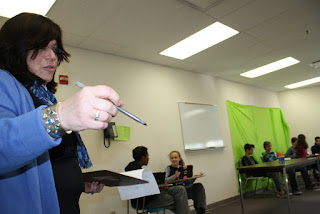 Posted by Miriam Gettinger at 11:29 AM No comments:


The annual "Academy Awards" were held on April 15th before an audience of 5th-7th graders and Middle School teachers and fans.Based upon the conceptual lens of sibling rivalry in the book of Bereshit, five films were nominated for best picture awards including Cain/Hevel, Yitzchak/Yishmael, Yaakov/Esav,Rachel/Leah and Yosef and the Brothers. Best picture went to the  Yosef story produced by NDS and AF with best actor awarded to AL ,best actresses to EN and AV and best supporting actor to DE. Students enjoyed the elegant dessert buffet and inflatable Oscars.See pictures and link to some of the films below: 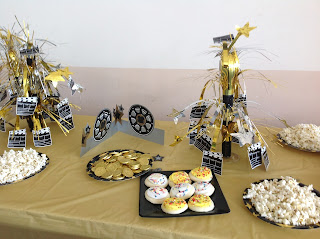 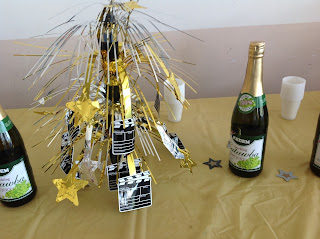 Posted by Miriam Gettinger at 1:28 PM No comments:

Honesty is Such a Lonely Word!


In conjunction with their unit of study on Yaakov and Esav, students grapple with ethical integrity responding to the Jim Joseph Honesty Survey and comparing their results with parents and teachers. Interestingly, they learned of gender and age differences as well as the strong correlation between character education in a school setting with decreased lying and cheating on exams among middle and high schoolers. Finally, they were challenged to what would you do in the scenario of finding $98,000 in a desk purchased from Craig's list!

Take the honesty survey yourself/check out the question on whether or not you were honest while taking the survey! It seems as if we delude ourselves as much as we do others.

https://www.google.com/url?sa=t&rct=j&q=&esrc=s&source=web&cd=1&cad=rja&uact=8&ved=0ahUKEwi6n5vj_tbKAhUMJCYKHTZxB2UQFgghMAA&url=https%3A%2F%2Fwww.surveymonkey.com%2Fr%2F%3Fsm%3DOyKhOzKjc5ONcllKe1BTnw%253D%253D&usg=AFQjCNHa9rPVPCQoilb96EPtom5o66fO3w&bvm=bv.113034660,d.eWE
Posted by Miriam Gettinger at 8:39 AM No comments:


Students watched the video clip of Solomon Asch's initial social conformity experiment in conjunction with our discussion of the negative peer influence of Yishmael upon Yitzchak.(Genesis 21;9-11)
Of special interest to them was the reflection upon Asch's motivation for the experiment as a post Holocaust inquiry.


Posted by Miriam Gettinger at 8:31 AM No comments:

Miriam Gettinger
Hello! I am Mrs. Gettinger. While I spend much of my day as principal of HHAI, I treasure the time I spend as a Judaic instructor in the Middle School.Currently, I teach eighth grade Chumash and MS Jewish history. As my father, Rabbi Wein likes to say "history is our rear view mirror." MS Judaics is an opportunity to bridge our classic texts and traditions with contemporary adolescence through concept and problem based inquiry and meaningful discussion.Check the blog for critical and creative thinking skill projects from "my kids."